Before accident in Missouri, duck boats had history of fatalities

By Mario Tacher on Jul 20 in Personal Injury Lawsuits.

At least 13 people died and more are missing after a Ride the Ducks craft capsized on Table Rock Lake in Missouri late Thursday. The boat, carrying a reported 31 passengers, sank as a storm lashed the lake with severe winds.

Some of the fatal incidents over the years have involved duck boat operators with the same company that operates Ride the Ducks in Branson.

In 1999, 13 people died after a duck boat sank on Lake Hamilton near Hot Springs, Arkansas. Only eight of the 21 people on board survived.

The Coast Guard concluded that a dislodged drive-shaft seal allowed water to flood the hull of the Miss Majesty.

In 2015, five college students were killed and 69 others were injured in Seattle after a duck boat collided with a bus. Ride the Ducks International of Branson, which operated the Seattle boats, was fined $500,000.

In 2010, a barge plowed into a duck boat that had stalled in the Delaware River in Philadelphia.

Two of the 37 people on board drowned. They were 16- and 20-year-old Hungarians visiting the United States through a church exchange program.

A tug operator eventually pleaded guilty to involuntary manslaughter, acknowledging that the accident was caused largely due to his use of a cellphone and laptop while steering the barge.

In 2015, a woman was struck and killed by a duck boat while she was crossing a street. The duck boat operator, connected to the Branson business, suspended its tours in 2016.

In 2016, a duck boat ran over a scooter, killing a woman and injuring a man, according to the Boston Globe.

Months later, another woman was struck and seriously injured by a duck boat at another Boston intersection.

Critics say that the amphibious vehicles are dangerous because their design creates blind spots for drivers.

‘How many accidents have to happen?’

In 2005, several “Ride the Ducks” companies merged into one under the name Ride the Ducks International, LLC, according to the Missouri Secretary of State’s website. Those included businesses in Branson, Philadelphia, Baltimore, San Diego and Memphis Tennessee.  At the time, it was registered under Herschend Family Entertainment Corporation, which also operates Silver Dollar City.

Later, the business was registered under Capitol Corporate Services, Inc.

Ripley Entertainment acquired Ride the Ducks in Branson in December.

According to Branson’s Ride The Ducks’ website, the company operates seasonally with the “Table Rock Lake Adventure” running from March to December. There are two boarding locations – one is on the Branson Strip, the other is on the Branson Landing.

A few on social media called for reforms after Thursday night’s incident near Branson.

At what point can we get rid of “Ride the Ducks” for good? How many accidents have to happen? You take a 5 ton war machine, that our veterans were forced to ride and try and turn it into an overpriced, dangerous attraction. Please pray for all effected by this Tragedy #BransonMO

A Twitter user named Jeremy Smith asked: “At what point can we get rid of ‘Ride the Ducks’ for good? how many accidents have to happen? You take a 5 ton war machine, that our veterans were forced to ride and try to turn it into an overpriced, dangerous attraction.” 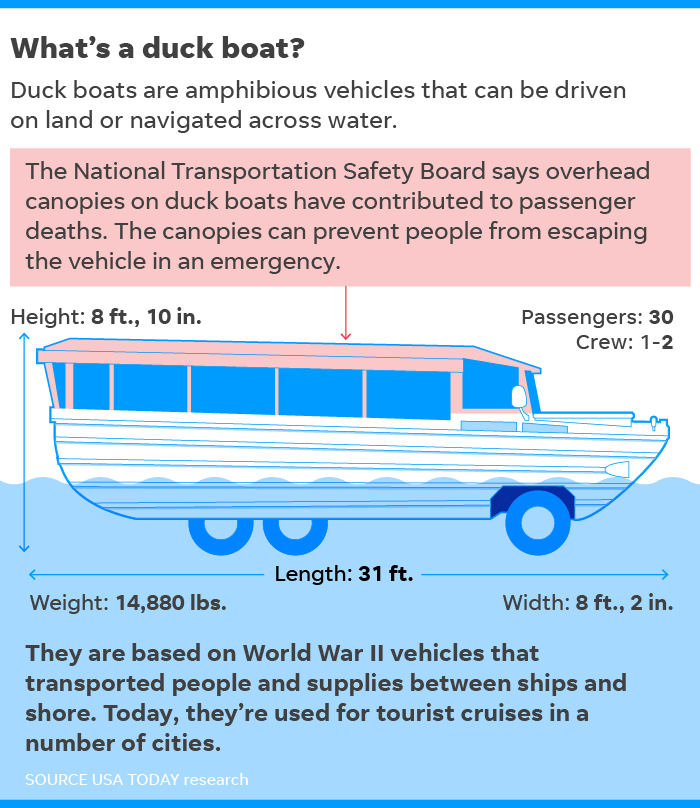